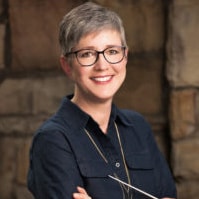 Performing as a freelance musician, Debbie Boos has played in community bands as guest soloist on flute and piccolo, and in pit orchestras and opera orchestras. She enjoys choral singing. Mrs. Boos has taught private flute lessons continuously since age sixteen, when her own teacher asked her to assist in her studio. She has subsequently taught preschoolers to senior citizens. She has come to learn that the art of education is rooted in encouraging people to reach beyond what they believe possible. Outside of the classroom, Mrs. Boos enjoys cake decorating, home DIY projects, cooking and travel.

A series of family moves brought Mrs. Boos to the University of Findlay in OH, where she was an adjunct faculty member and director of the Findlay Flute Choir. While living in Ann Arbor, MI, she focused on church music and children’s education. A move to northeast Ohio brought her to teach at Our Shepherd Lutheran School in Painesville, OH.  She arrived in Gadsden, AL late in 2009, and quickly got involved in local arts and music education, including performing with CharACTers Theatrics in pit orchestras for their productions (including “Les Miserables,” “Ragtime,” and “The Music Man”) and teaching Choir at Southside High School. She has served as an instructor at Gadsden State Community College; has directed a chamber orchestra for the Anniston Christian Academy; and was assistant director of the Oxford Christian School Concert Choir.  She performs with the Gadsden Symphony Orchestra and the Jacksonville State University/Community Orchestra, and also enjoys playing every week in her church orchestra. For six years before joining the staff, Mrs. Boos volunteered time and expertise with the EYO, coaching Red Brick Collective ensembles, serving as a rehearsal conductor for the Etowah Symphonic Wind Ensemble, chaperoning performance tours, and coaching the vocalists for the EYO Rock & Roll Christmas production.