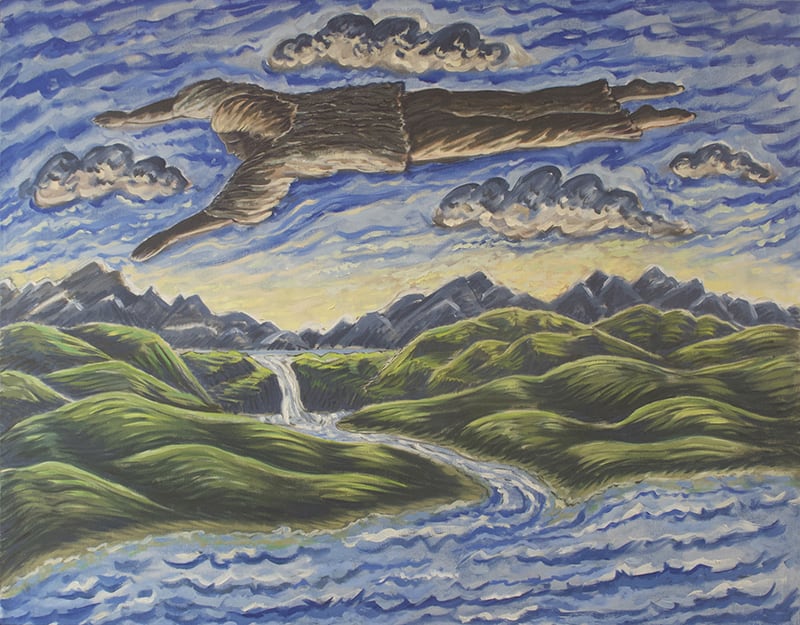 On view October 4 through December 3

“The unexamined life is not worth living.” New York painter Francie Lyshak cites Socrates’s irreducible maxim as an idea common to every phase of her extensive and affecting body of work. Often turning her focus inward to stare down and pick apart a lifetime of personal experience—some of it highly traumatic—she offers viewers a cascade of stories and spaces into which they can immerse themselves spiritually and emotionally as well as visually. Drawing on a training and professional career in art therapy, Lyshak wields her knowledge of painting as a tool for surveying the landscapes of mind and heart.

Lyshak began her artistic journey in Manhattan’s East Village in the 1970s, interacting with an extraordinary community of artists, musicians, and writers including Peter Hujar and David Wojnarowicz— a scene she documented in a series of interviews and images titled “The Bar.” During this period, Lyshak developed a style of painting that deviated from the prevailing trends of minimalism, Pop, and conceptual art. Combining dreamlike images of dolls and toys with human and animal figures, she set out to explore psychological themes from a feminist perspective, and in 1993 staged an exhibition that examined her own recovery from sexual abuse. In the years following this pivotal undertaking, Lyshak’s aesthetic has undergone a gradual shift from illustrative figuration toward pure color field and monochrome abstraction, in some works combined with incised texts that repeat simple words and phrases. Her art remains directed toward contemplation of the self, but in her most recent canvases, she allows the material of paint itself to take center stage, establishing open fields of color and texture that allow for more open-ended interpretation. Dispensing with identifiable narrative and symbolism, she conjures moods and atmospheres that prompt a meditative gaze, a calm, mindful and hard-won form of looking.

New York painter Francie Lyshak studied art history at the University of Michigan, Ann Arbor, then traveled to Paris to study painting for a summer. Returning to the United States, she studied for a BFA at the Center for Creative Studies and Wayne State University, both in Detroit. Later, she earned an MPS in Creative Arts Therapy from Pratt Institute, New York. Making use of her graduate training, Lyshak designed and led community art service programs in New York and New Orleans and launched an art therapy program at Bronx Children’s Psychiatric Hospital. This professional immersion in art as a therapeutic tool influenced the focus of her subsequent visual practice on psychological experience.

Lyshak began her artistic career in New York’s East Village in the 1970s, developing a style of painting that explores emotional themes from a feminist perspective. In 1993, she staged a key exhibition, “The Secret,” that explored her recovery from childhood sexual abuse, and published an accompanying book of the same title. After this project, Lyshak’s aesthetic began a gradual shift from figuration toward color field and monochrome abstraction, and work with incised handwritten text.

Francie Lyshak has been the subject of solo exhibitions at venues around New York including, most often, La Mama La Galleria and Carter Burden Gallery. She has also participated in numerous group exhibitions at venues including La Mama La Galleria, Denise Bibro Fine Art, A.I.R. Gallery, RC Fine Arts, Barbara Ann Levy Gallery, Sikkema Jenkins & Co., Carter Burden Gallery, and Stephen Harvey Fine Arts, and has shown work with curators and jurors including Alice Neel, Patterson Sims, and Paulina Pobocha. Her work has been reviewed by J. Vojtko and discussed in New York magazine, and she has been interviewed in the online journal firstindigoandlifestyle. Lyshak is the recipient of awards at competitions and events including the First Annual Prize Competition, Provincetown Arts Association and Museum; Museum of the Hudson Highlands Fourth Annual Competition, Cornwall-on-Hudson, NY; and Annual Faber Birren National Color Award. Her work is represented in the collection of the Bronx Psychiatric Center, and in private collections in the US and UK.

On view October 4 through December 3 Commentary “The unexamined life is not worth living.” New York painter Francie Lyshak
Read More