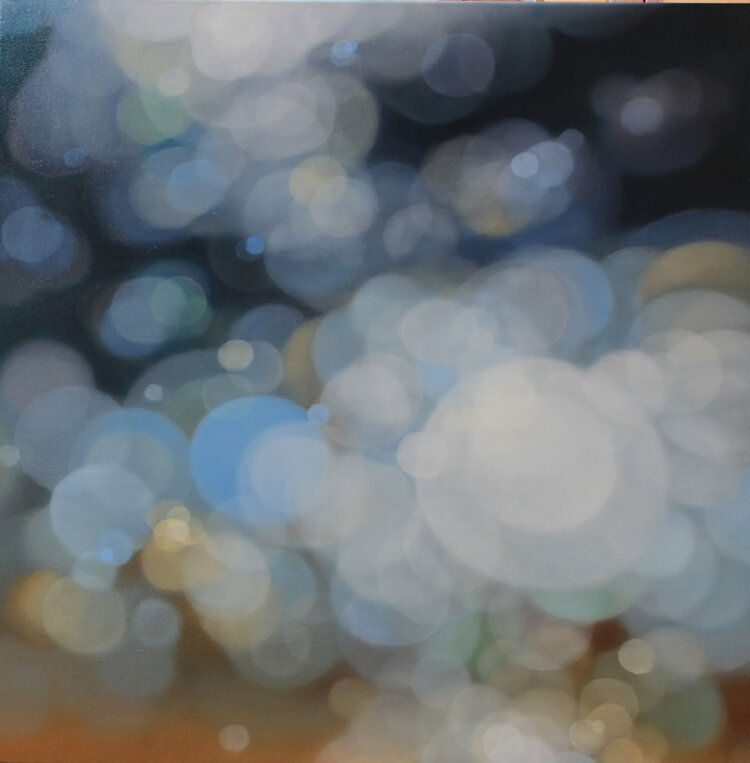 On view October 4 through December 3

California artist Jennifer Shifflet is dedicated to an ongoing visual exploration of the ethereal and the ineffable, of the fleeting qualities of light and life. Moving from painting and photography to work in kiln-formed glass, she has, over the past twenty years, pursued a fascination with fluid and liminal states. The subject is consistent with her Buddhist-influenced understanding of the world as at once unified and endlessly shifting; for Shifflet, light and color function not only as perceptual elements, but also as indices of life and death. In oil panels comprised of layered fields of radiant hues, and close-up photographs depicting glittering particulate surfaces, she exploits the properties and implications of the gradient to reflect and encourage a slowly transformative experience of looking. Citing influences from Monet, Turner, and Rothko to Agnes Martin, Mary Corse, and the Light and Space artists, Shifflet suspends the viewer in a luminous, oneiric world.

Shifflet first became interested in glass for its capacity to alter light through reflection and refraction, a direct interaction not possible in other mediums. She continues to experiment with the material, occasionally combining it with paint or other substances. The resultant panels allude to landscape— ambiguous and internal spaces rather than specific external locations—and also, by virtue of their object status, have a certain architectural quality. At once delicate and surprisingly strong, they embody the essential duality of nature. Shifflet is also interested in optical phenomena such as the halation effect (how a color is perceived in relation to those surrounding it), using them to conjure atmospheres rather than images. Giving her works’ generous, optimistic titles such as Cherished and Waves of Spring, she welcomes the viewer into an environment that feels endlessly vital, renewing itself in variation after dazzling variation.

California-based artist Jenn Shifflet was born in Minneapolis, Minnesota, in 1972. She earned a BA from Evergreen State College, Olympia, Washington in 1995, and an MFA from John F. Kennedy University in Berkeley, California in 2004. Her work has been exhibited nationally since 1988 in solo exhibitions at venues including Alta Bates Gallery and John F. Kennedy University Gallery, Berkeley; Chandra Cerrito Contemporary, Oakland; SF MOMA Artist Gallery and 425 Market, San Francisco; and Studio 321, Olympia, Washington.

Shifflet was awarded an affiliate residency at the Headlands Center for the Arts from 2004 to 2007. In 2009, she was an awardee in the Alameda County Purchase Program and a Commission Awardee for the Alameda County Juvenile Justice Center, and in 2015 the Highland Hospital. In 2015, she was Bullseye Artist in Residence, San Francisco and in 2013, she was the recipient of a Pollock Krasner Grant.

Shifflet’s work is represented in the collections of John B. Collins and Associates; DKS and Associates; the Evergreen State College; F&M Bank; LEK Consulting; Mascone Marriot, San Francisco; Ritz Carlton, Dubai; Sovran Bank, Maryland; and the Westin Verasa, Napa, among many others. Her work has also been reproduced and discussed in Artweek Magazine, SF/Arts in the New York Times, Art Practical, Art Ltd., East Bay Express, and Square Cylinder, and featured in books and catalogues published by the Berkeley Art Center, Chandra Cerrito Contemporary, Di Rose Preserve, ProArts, and Walters Art Museum, among others.

On view October 4 through December 3 Commentary “The unexamined life is not worth living.” New York painter Francie Lyshak
Read More