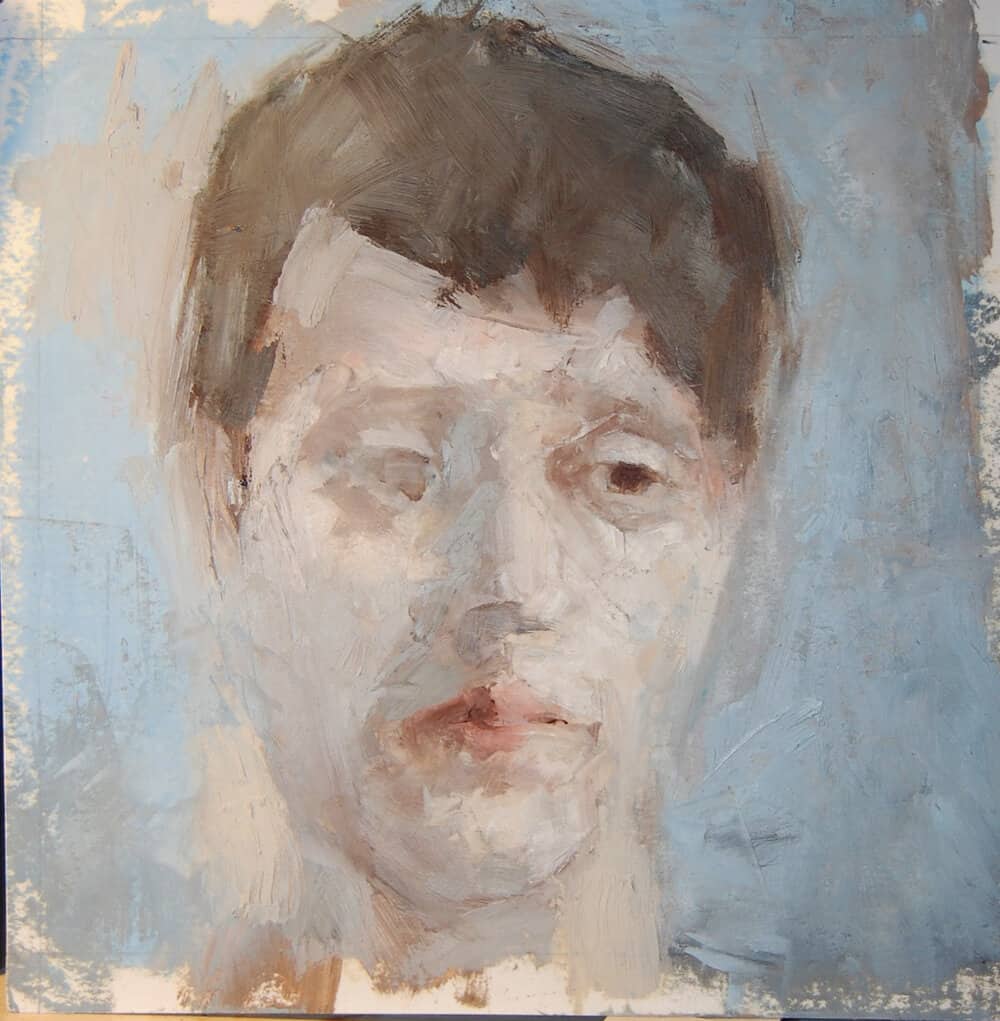 The Hardin Center’s Chan Gallery is pleased to host works from Jim Singelis from April 15 – Mary 30, 2021. The gallery is open Monday-Thursday from 10 am to 5 pm and Friday from 10 am to 1 pm. Admission is free.

The human face is sometimes called a mirror of the soul, but more often than not it wears a mask of blasé or stoic indifference. Jim Singelis has created a world where all such masks are stripped away and human faces can be seen in their natural, unguarded state: wary, defensive, fearful, brazen or downcast, in shellshock, disbelief or ecstasy. Fully expressing life, but unable to see themselves being watched, one can stare at the faces without inhibition and experience the immediacy of their emotion as though they were standing in the room.

The artist describes the images as self-portraits without a mirror, and the complex emotions they represent do embody a singular and personal intensity. The series actually began with one clear and literal self-likeness, and he starts each new painting or drawing by sketching his own reflection. But from there he improvises, and while he observes and reacts the image takes on its own personality, going through many changes, sometimes alternating between male and female or even becoming another species before reaching its final form. Marks documenting the process remain visible; the multilayered, extensively worked surface creates both background and context, and the consequent ambiguity adds strength.

An amateur dancer of the tango, Singelis adapts its dramatic hooks, turns and slides to his painting technique, using large, sweeping arm gestures as much as his hand in producing an image. He prefers working to the sound of 19th century Romantic music or recordings of thunderstorms, and in spirit his portraits resemble the larger-than-life, heroic or godlike characters in opera or the theater. But their exaggerations, distortions and subtleties extend beyond the range of human actors.

As they come to life, the portraits represent not only himself, but also individual characters with whom the artist becomes acquainted; characters who have an inner life and relationships of their own in a world whose population continues to expand. He also intends them as self-portraits of a kind for those who look at them, mirrors of emotional states and conditions they know and relate to through the lens of their own experience. Titles are purposely left vague, allowing observers to contribute the narrative or interpret the content for themselves.

Although he prefers to think of them as living beings and consequently subject to infinite change, Singelis pronounces the portraits finished when he recognizes an image that opens an insight into the psyche, specific and precise yet universal, a prototype that resonates through its authenticity. Within the complex, deeply expressive images are strong echoes of expressionism, surrealism and classicism, making them easy to absorb. The cumulative effect is a whole and recognizable imaginary world within the mind of the viewer, and one comes away from them feeling enriched.

Jim Singelis was born in Warren, Ohio and grew up in Connecticut, Maryland, and Illinois, where he attended Lake Forest Academy as a boarding student. He was awarded a Bachelor of Arts from Indiana University in 1967 with a double major in Italian and Art History; he then pursued art history studies for another year at Universita di Bologna, where he found the experience of being
immersed in Italian art and architecture as important to his later development as the academic studies themselves.

The theatre, especially the backstage elements of designing, lighting and rigging scenery had been a major of interest since childhood; one of his earliest inventions was a puppet theater. Upon returning from Italy he enrolled at the University of Arizona and earned a Master of Arts in Technical
Theatre and Set Design in 1969.

For the next two decades he designed scenery for theatre, movies and print advertising and taught scenic design for 10 years at the noted Lester Polakov Studio and Forum of Stage Design. Film credits include art direction for Once Upon a Time in America with Robert De Niro and See No Evil, Hear No Evil with Richard Pryor and Gene Hackman.

Then he acquired his first computer and quickly became enthralled. He enrolled in the Computer Technology Applications program at Columbia University, which he completed it in 1991.The skills he learned made it possible to work from home, and this in turn enabled him to leave New York City for the serenity of Berkshire County, Massachusetts.

While he was consulting with programming clients near his home and around the country, his interest in art was reignited by open studio life drawing classes at IS183, the Art School of the Berkshires. Eventually art-making supplanted computers, and in 2009 he began painting full time.

Jim Singelis has shown previously in solo and group exhibitions, including The Other Art Fair in Brooklyn; in Massachusetts, he has exhibited at Knox Gallery in Monterey, St. Francis Gallery, Lee, the New Marlborough Arts Center, and the Sandisfield Arts Center.