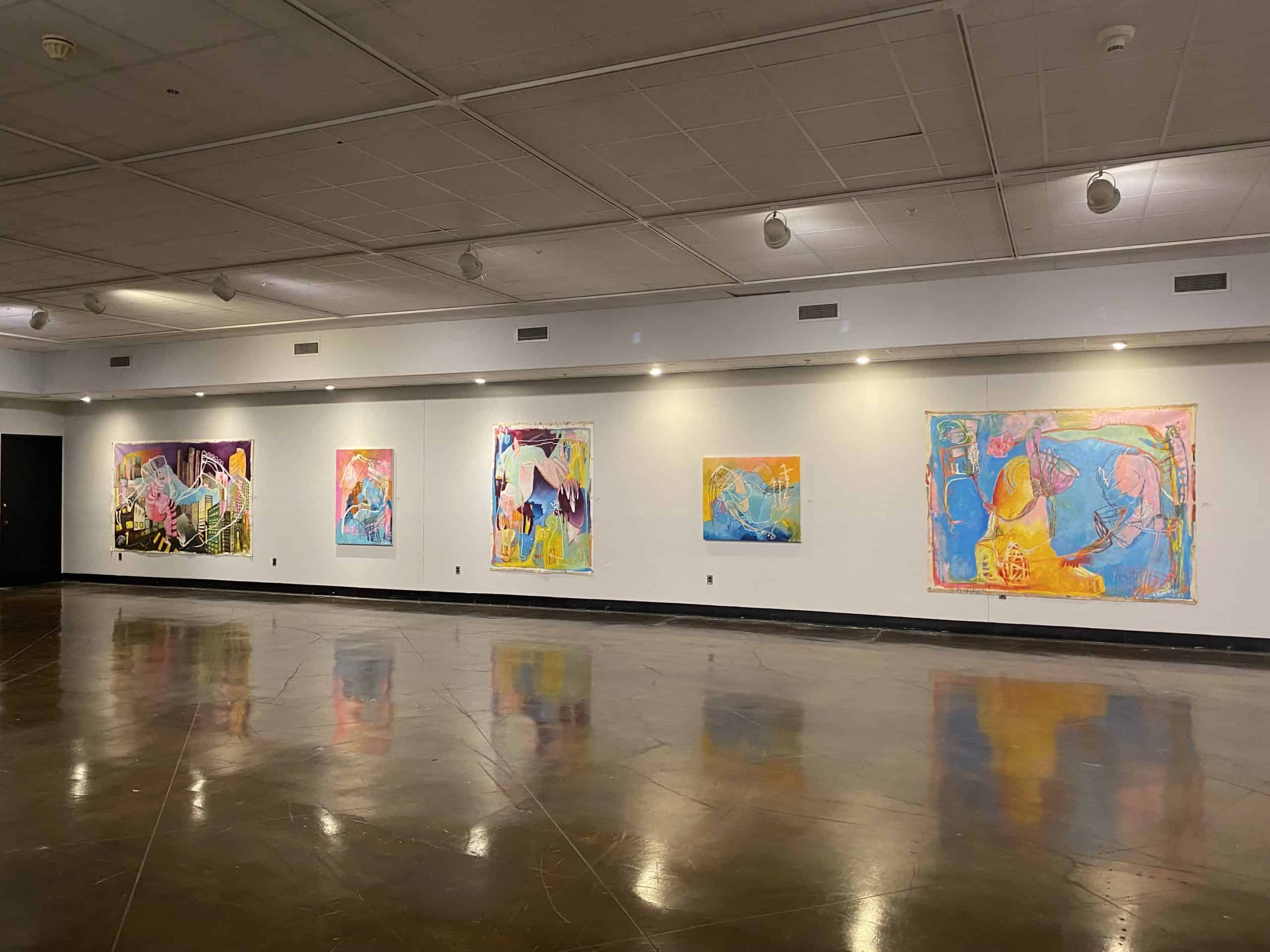 Hong Kong-born Kaye Freeman moved to Tokyo, England, and Australia before settling in Los Angeles; hers is a transcultural journey that informs a visual practice which itself has steered between diverse forms and ideas. Moving gradually from abstraction toward a more representational style, Freeman works in oil paint, oil stick, graphite, and mixed media, exploring politics, gender, identity, religion, and violence through continually unfolding “cosmic origami.”
Freeman’s work is informed by diverse influences, many of which reflect her upbringing and education. The way she arranges an image, for example, mirrors the shifting perspective of classical Japanese landscape, while her knowledge of that country’s calligraphic tradition shapes her commitment to immediacy and narrative. She’s interested too in the symbolism of color—using it to raise issues of gender and race alongside more formal concerns—and in the religious associations of light.

In her recent series City Paintings, Freeman explores the layered reality of her urban home. The artist is a keen observer of the varied and complex ways in which the locale’s diverse peoples and places harmonize and clash with one another. From actors to gang members, crumbling vintage structures to expansive new developments, she details a complex economic, social, and aesthetic matrix in which sunshine and darkness coexist. In another series, Freeman departs from the city to depict the rural landscape of Joshua Tree.

Having initially visited with sketchbook and oil sticks, she eventually produced an ensemble of large paintings characterized by layered shapes and intense color. In these canvases, natural forms are pared down and abstracted to describe a metaphorical journey from despair to joy. Elsewhere, Freeman uses the fable of the Emperor’s New Clothes to observe politics, history, and human nature through the conjoined lenses of economic imbalance and increased “chatter,” only a small portion of which is informed and productive.

The daughter of an English father and an Australian mother, artist Kaye Freeman was born in Hong Kong in 1963 but moved with her family to Tokyo when she was three years old. After continuing her education there and in Hong Kong, she graduated from high school in England. Freeman later relocated to Australia, where in 1991 won a scholarship to attend the Julian Ashton School in the Rocks, Sydney. More recently, Freeman earned a diploma in painting and printmaking, and in 2016 moved again to downtown Los Angeles.

Freeman began her professional career in the film industry as a set finisher and painter of backdrops and props. In 2007 she qualified as a teacher of Japanese and art, and in 2013 began to focus exclusively on painting, drawing, and assemblage. As an artist, she has moved gradually from abstraction toward a more representational style, working in oil paint, oil stick, graphite, and mixed media. Freeman explores themes of politics, gender, identity, religion, and violence, and has described her practice as a form of “cosmic origami” that explores the myths and symbols shaping modern life.

Freeman has been the subject of solo exhibitions at Australian venues including Frankston Arts Centre, Gasworks, and Walker St. Gallery, Melbourne; ARDT Gallery and TAP Gallery, Sydney; Wangaratta Art Gallery; Wodonga Art Space and Wodonga Council Chambers; and Kingdom Gallery 775. She has also exhibited in Germany, Japan, and the United Kingdom, and in the US has shown her work at venues including the Lancaster Museum of Art & History. She has also exhibited at events including Art Palm Springs and LA Art Fair, and at venues including Brand Works on Paper in Glendale, and Womens Own Gallery in Chicago. She has also collaborated on a book with poet Natasha Dennerstein, Turn and Face the Strange.

On view in the Chan Gallery through August 31, 2021 There’s a perverse attraction to abandoned sites and tumbledown buildings
Read More
Donate Now
info@culturalarts.org
(256) 543-2787