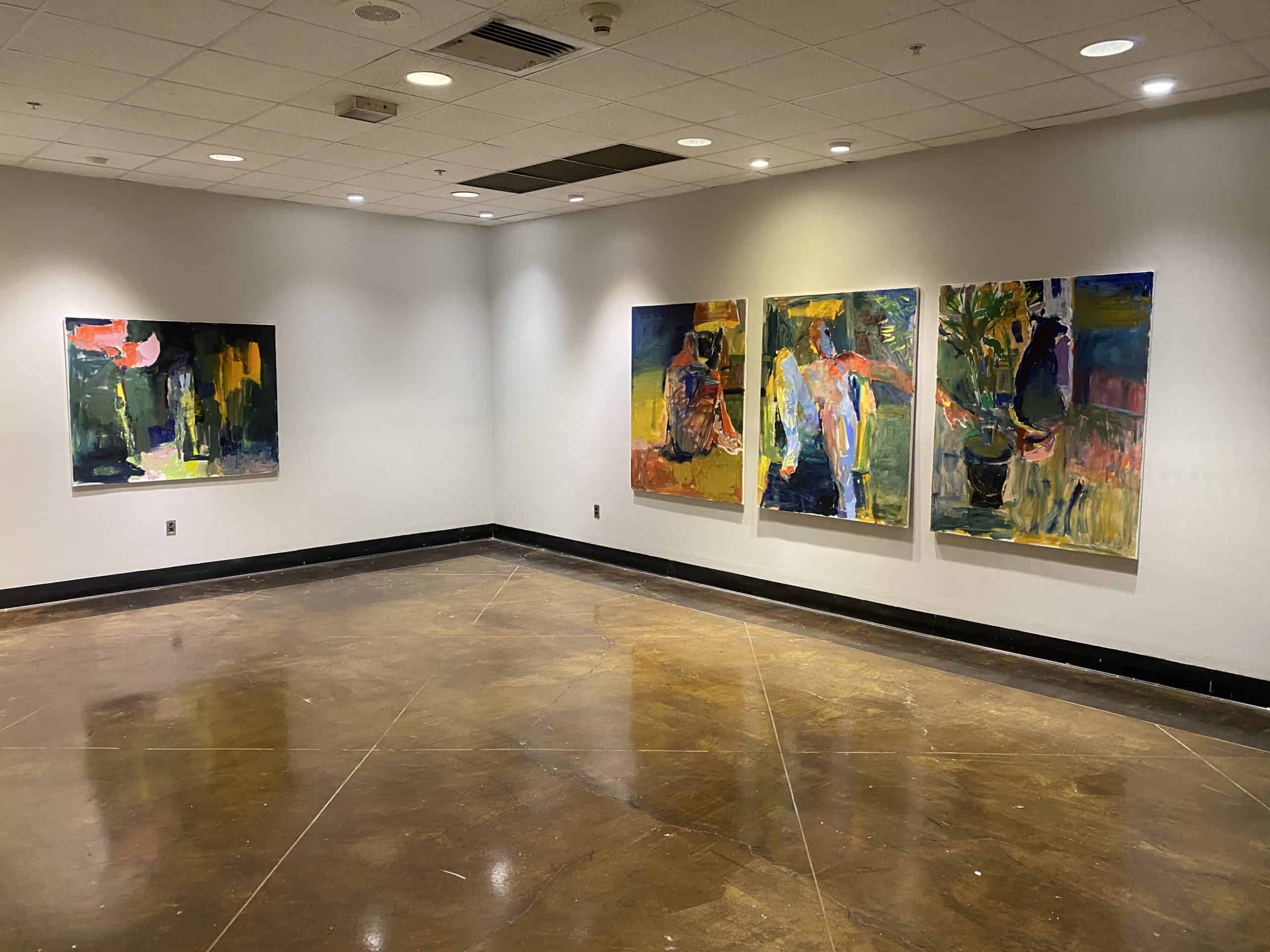 The Hardin Center’s Chan Gallery is pleased to host works from Connecticut artist Peter Cusack from April 15 – Mary 30, 2021. The gallery is open Monday-Thursday from 10 am to 5 pm and Friday from 10 am to 1 pm. Admission is free.

In his current paintings, Peter Cusack explores themes of human identity, sexuality, consciousness and
crisis, illuminating the hidden psychological realities of everyday life. Heroic male and female figures
live their lives beyond the view of ordinary society, revealing interior monologues of desire, longing,
rejection, ambiguity, fear and despair – but without shame, inhibition or the need to conceal.

Cusack’s emotional insight, technical skill and freedom from convention make these revelations
possible. His subjects are intriguing and deeply complex; the roles and rituals they portray can be
recognized from our shared experiences. The echoes of the art of past centuries enrich his imagery,
but these representations appear fresh, spontaneous and honest.

His hand is confident and his intuitions are sound. Cusack never starts with a preliminary drawing
for either his watercolors or oils, which give his work immediacy, vitality and transparency. Every
impulse in his process becomes a visible record; beginning with a few quick strokes, he allows
hands-on use of the materials and his own compulsion to move the process forward.

Large oil paintings, diptychs and triptychs are his favored formats, in part for their associations with
the Church and their place in art history, the study of which eventually led Cusack to painting. The
divisions also have a practical function because he conceives each panel not only as part of the whole,
but also a complete work of art in itself. Delegating his figures to a separate field but with multiple
correspondences, this pictorial scheme permits him to isolate their individual psychology in a more
focused way, which amplifies, clarifies and enriches their interactions.

Even the watercolor of a mundane subject may convey dark overtones and resonances, yet nothing
looks overworked or contrived. Producing watercolors as an ongoing record of everyday events in
and around a country house, his style is fast and loose using a palette based on primary colors, with
splashes of deep purple, dark green or black. Chopping garlic, napping with the dog, a table set up for
a dinner party, a glimpse of the house from afar: they all convey the essence of a fleeting moment in a
life well lived.

In spite of Cusack’s vague or ambiguous titles, the characters in his dramas come across as real people in
real situations, and it is the strength and resonances of Cusack’s images that makes a narrative possible
for the viewer to construct. His subjects, their imposing and memorable presence, are realized with
unstrained effort through the use of form and color alone.

Peter Cusack was born in the Bronx and grew up in Yonkers surrounded by a family of artists, musicians and writers. A solid Jesuit education introduced him to philosophy and analytical thinking, and he made the Dean’s List with a major in English and a minor in Art History at SUNY Albany, going on to earn an MA in Illustration at Syracuse University.

Out of college, Cusack knew instinctively he would have to engage with the act of painting for himself: do it, not just look at it. Although he started with nothing in the way of formal training, he trusted in a talent he believed to be innate and universal. His familiarity with the work of the masters would also be a guide: periods he found most instructive are the Italian Renaissance, the Baroque period in Northern Europe, and post-war Abstract Expressionism in America. He laid a foundation by studying technique
with accomplished painters at the Art Students League and L’Ecole Albert Dufois, Les Cerqueux Sous Passavant, France.

As an English major Cusack was also proficient in writing, and his combination of skills led to work in publishing. At first a production associate at Consumer Reports, he later became production and design manager for a small press in Fort Lee, New Jersey. He also worked as a freelance illustrator, and
one of his posters was commissioned by the MTA to celebrate New York subway riders. His work is included in the collections of the New York Transit Museum, the Museum of American Illustration, and the United States Air Force Art Collection.

His experience in commercial art increased Cusack’s awareness of the relationship between the artist and his audience, and it is this relationship that continues to be of the greatest importance to him. When he moved to the suburbs and wanted to make friends with the neighbors, who didn’t quite understand what artists do, he considered what he could do to introduce them to his work. The solution was what Cusack calls letters or notes, patched together fragments of watercolors used as brush strokes to create
drawings, a form of communication he offered as gifts.

He has taught drawing at St. John’s University and the Fashion Institute of Technology, and he teaches privately as well. He has led many workshops and demonstrations, and he contributed to An Illustrated Life: Drawing Inspiration from the Private Sketchbooks of Artists, Illustrators and Designers,
by Danny Gregory, and Drawing Inspiration: Visual Artists At Work, by Michael Fleishman.

Cusack lives in Litchfield County, Connecticut and maintains a studio at Mana Contemporary in Jersey City.